Additive manufacturing in construction is a real enabler for the creation of optimal structures. It breaks the limitations of classical construction and provides the possibility of design and optimization for every feature and property of the structure, especially material and shape. To that end, a simulation-based  optimization tool has been developed at the Chair of Structural Analysis, TU Munich. The tool is implemented in the Kratos-Multiphysics open-source frame work and has the following state of the art features: (a) efficient and consistent filtering techniques for shape, thickness and material/topology optimization [1] (b) adaptive gradient-projection technique developed specially for problems with an arbitrary large number of design variables of different scales [2] (c) abstract implementation which realizes concurrent and nested multilevel-multi-scale optimization problems. The later allows optimisation of structures considered as large 3D puzzles with multi scale optimisation aspects.

Topology optimization of structures composed of multiple materials, such as reinforced concrete structures, is challenging. In the current state, optimal decomposition of structure is realized by an efficient implementation of multi-material topology optimization, thanks to the newly developed filtering techniques. Figure 4 represents the optimal material -distribution/-decomposition for a beam under static loading. The stiffness of the bam is optimized for a given mass and materials. Here, different materials are realized by density and Young’s modulus. Variable length-scale enforces the minimum material thickness constraint throughout the design space, i.e. the cubic domain. The effect of the length-scale on the optimal design can be seen in Figure 4, where the small length scale resulted into the creation of void regions.

Aims for the future

Since concrete is the main material for additive manufacturing in construction and it is more suitable to take compressive loads, we plan to optimize for compression-dominant structures. This is going to be tested on the cubic concrete node that was introduced earlier. The node is going to be optimized for minimum mass and minimum tension (compression-dominant structure) without sacrificing the stiffness. 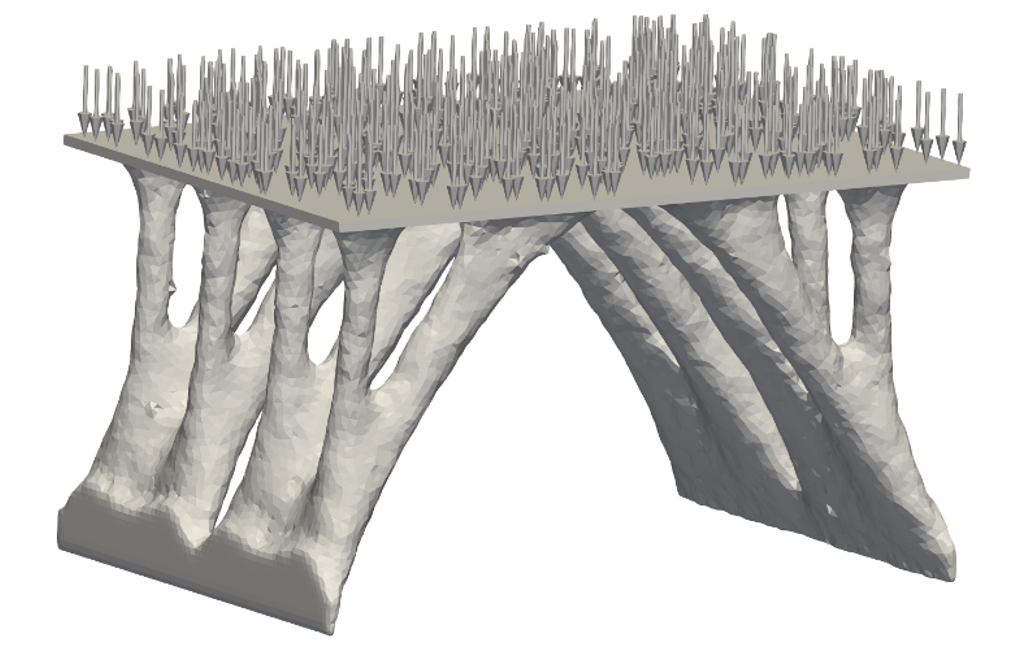 Figure 1) Topology optimized concrete node under a uniform distributed loading. The volume fraction is 0.2 and strain energy optimized by 87.5 %. 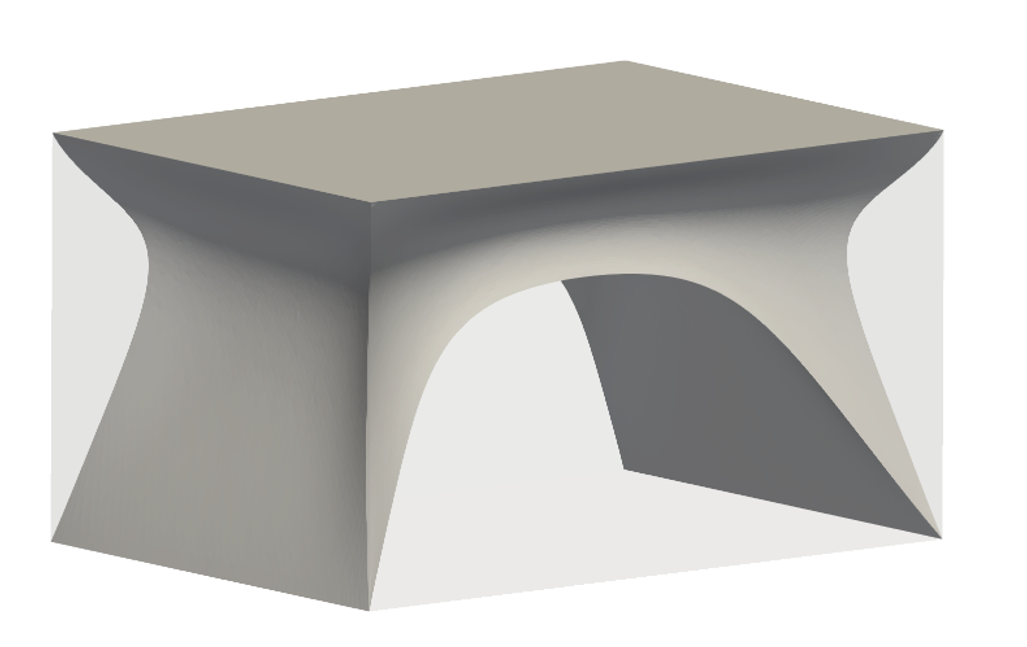 Figure 2) Shape optimization of a cubic node under self-weight. The initial cubic shape is shown in low opacity. The mass and strain energy are reduced by 80 %. 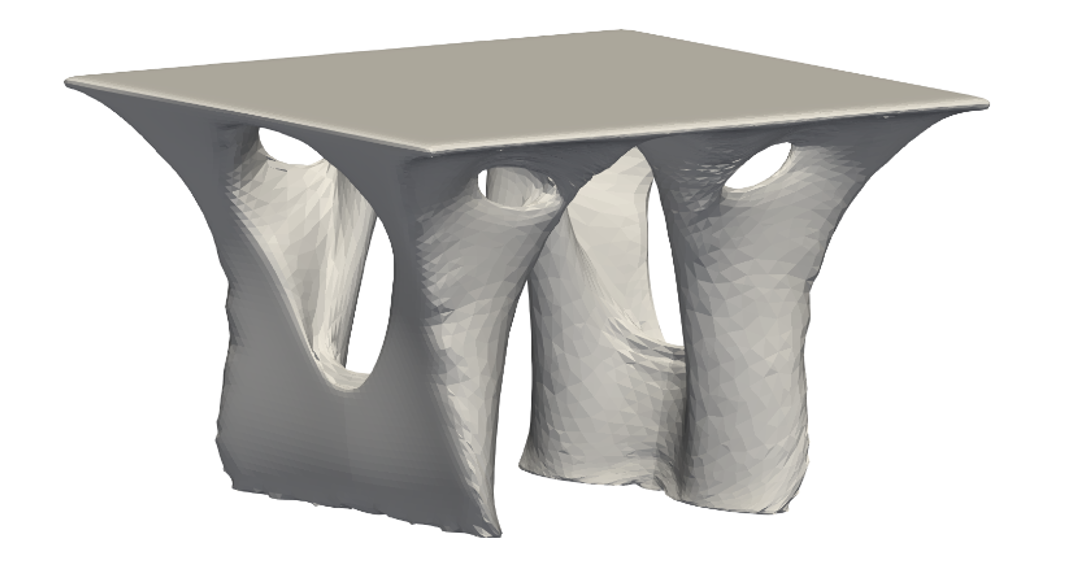 Figure 3) Concurrent shape with topology optimization of concrete node under a uniform distributed loading. The volume fraction is 0.2 and strain energy optimized by 99.98 %. 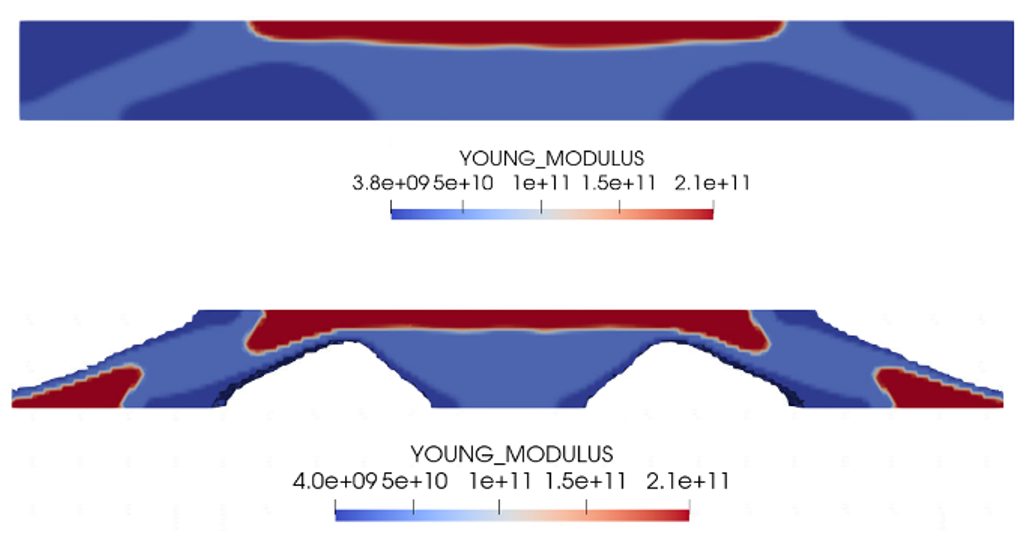